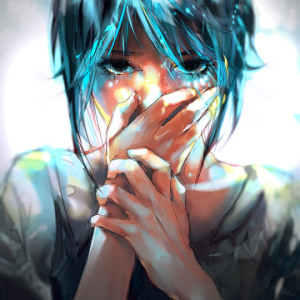 Art by Wenqing Yan. Click the picture to go to the artist’s DeviantArt.

There’s a great Tumblr called writeworld which posts images for writers to help their inspiration.  Try to do them every once in a while, which I will share here. Here’s the prompt from the Tumblr:

A picture says a thousand words. Write them.

Be sure to tag writeworld in your block!

Sarah Hecate comes from a lesser Nekromancer house. The greater and the lesser houses were determined by their stature within the government. Anyone who ascends the duchy ranks immediately becomes recognized as the head of a house and  thus their house would fall into the greater category. Since Sarah’s family came from a long, long line of duke’s guards, seems like her caste in Mortician society would remain the same. She presented herself unlike many other Nekromancer girls, who kept their hair curly and long or had some deliberate patches of hair shaved off if their hair was straight. For maximum practicality, she kept her blue hair short, but she had these large, expressive eyes that often betrayed her feelings. As most Nekromancers, her frame was small but, as most warriors, packed with muscle. She could have slain a dozen men larger than her using just her Nekromancy alone. Her strength had limits, however.

When the burning of Duchy Nine in 4.327 happened, Sarah fought hard to protect her immediate ward, Lord Wren Demimonde, son of the Lord of the Duchy, Duke Demimonde, also the Earl of Duchy Nine. For all her skill with her Phantom Limbs, she could not spare him from an untimely death. This event left her emotionally and physically shaken, wondering if she even had the capacity to care about another duke. Guards did not slaughter dukes. She then went off to military academy in a far-off land, to get the training she needed to do a better job for any subsequent assignment. But mostly, she just felt ashamed of not being able to protect her beloved Earl. Making new friends was not a prerogative for her, but upon meeting the main protagonist crew, she soon warmed up to the idea of friendship. But the theme of “ulterior motives” is still present in this character and I’m still working through that manifestation.

Want to find out what most of the new terms in this post mean? I’m working on a proper book series, which is starting to look less and less like some distant fantasy. Follow my progress on Twitter — I complain PLENTY about self-editing!