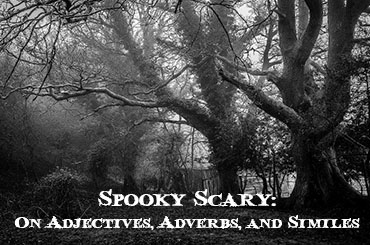 I saw this tweet the other day that replaces all the adjectives in H.P. Lovecraft with the word “spooky.” I then saw another tweet that removed all the adjectives, adverbs, and similes altogether. Let’s do a quick exploration. It’s also October so talking about spooky things is totally in right now.

Appropriately, I’ll start off with illustrating my snarky point. Descriptor words are like salt: Add just enough and you can enhance the flavor of your writing. But add too much and all you can experience are the descriptors, completely ruining your work.

Now, let’s rewrite the first sentence: “I’ll start off with illustrating my point.” Does that not sound better? It’s a complete sentence. “Appropriately” doesn’t add anything, neither does “snarky,” and neither does “creatively.” I’m asking you, the reader, to infer those descriptions from the way I’ve chosen to open up my discussion.

I come from a scientific background in which succinct writing is encouraged and every word should serve a purpose. While there is more leeway in creative writing, I still believe that words should have a reason to be taking up space, time, and sounds in your work. In recent readings, I have also realized that I enjoy writing that shows me and doesn’t tell me.

Example 1 (Adjective): She is a high school senior.
This is an example of a fine use of an adjective. The word “high school” tells us how old she is, what stage of life she’s in, and, if you extrapolate enough, can give the reader insight into her life experience so far. A “high school senior” is much different from a “college senior” and both are different still from a “senior.” Descriptors embellish and can build character in a single phrase.
Alternative: She is seventeen going on eighteen and in her last year of high school, preparing for college.
Too many words are used and all the details described can be summarized by inserting the phrase “high school.”

Example 2 (Adverb): She works diligently.
This sentence tells me nothing. I know what the word “diligent’ means, but put in a sentence without showing me any context is wasted space.
Alternative: She works by leaving no page unturned and keeps a stack of notebook that bursts at the seams.
This character is diligent because we are shown that she pays attention to detail and takes lots of notes. On the other hand, adverbs are completely fine when characters describe other characters because the goal of conversation and dialogue isn’t really to paint an image in the reader’s mind (unless a character is telling a story, I’ll probably do a post on that later)–that’s what prose is for.

Example 3 (Simile): Her hair shined bright like a diamond.
There are two ways to approach this one. I would leave the sentence as is if not for the fact that diamonds do something. In fact, they can do many things, such as sparkle, twinkle, or shine. You can end the sentence at bright (which is colloquially correct). “Twinkle” might not be the right word, unless your character has glitter-hair. But “sparkle” is a good one, since there’s an association with clean objects having some kind of light bouncing off them.
Alternative: Her hair sparkled. Her hair shined bright.
The sentence is shorter and sounds less cliche.

Half the battle of writing work leaves an impression, be it trying to elicit a feeling or trying to scare the reader, is to pick your words carefully. The devil is in the details and sometimes taking the time to flesh out descriptions that otherwise could be summarized with any of these devices can result in better enjoyment of a work because the reader’s imagination gets to play. My main problem rests in the fact that oftentimes, taking the lazy route can insult the intelligence of a reader. And no one likes feeling insulted. At the same time, too many words can feel like hand-holding, but it’s your work and I want to experience it the way you intended me to. Think of it more like a guided tour that’s open to interpretation rather an inventory.

So challenge yourself. Replace singular verbs with phrases! Use words that can create an image by themselves. 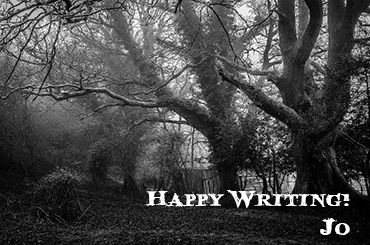 One thought on “Spooky Scary: On Adjectives, Adverbs, and Similes”