You know, I was going to open this with a quip about how there’s like two castles in North America. But turns out, there’s one in Mexico, a few in Canada (most are mansions, cheaters), and several in the U.S. But I’m going to share with you information about Wawel castle in Poland, which had been built in the 1300s.

Poland’s been around since 966. Yeah, there’s that weird period where it disappeared for a few decades, but other than that, longer than you think. Wawel castle was built a few centuries later when the greatest king decided to make a home for himself on top of the hill at the bend of the Vistula River.

The castle is amazing because it has survived every world war, several fires, and so many dynasties. You can see every era of architecture in the design of the cathedral. There’s a church in a church wrapped in towers and it’s quite wonderful. It provides a great framework for describing and designing places in your fantasy world that have survived the test of time. 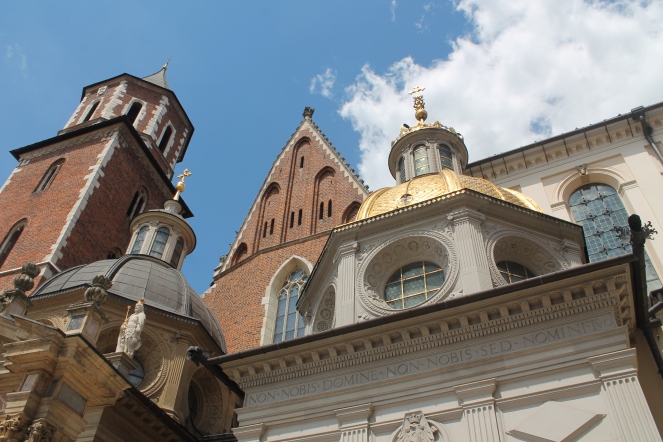 One thing I didn’t get to do last year when I was in Poland was visit the interior of the castle. If you’re going to visit Wawel and you want to visit right, do all the guided tours. My boyfriend and I saw the royal apartments and the royal state rooms.

Those pretty balconies? Well, royalty really wanted Italian-style architecture for the house of the royal family. The problem? Poland has/had brutal winters. So those outdoor areas were used for servants. And where people added coal to the indoor heaters. The king and queen kept separate wings of the upper floors and generally saw each other during official visits or festivals. 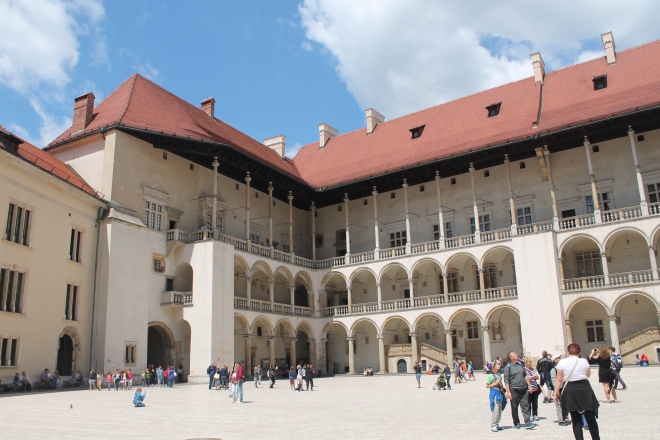 Also a fun fact: Ever seen a medieval bed? They were short. Because people slept sitting up due to paranoia about dying over night. According to our guide, she tried it once and hated it. It’s pretty ironic considering sleep quality and longevity are related.

The bureaucrats, dukes, and other legislative people did their work on the first floor. The amount of awesome “jewelry” boxes that were safes for seals and other stationary were phenomenal to look at. My favorite piece was a slanted chest that merchants used as a pillow when traveling. Because you know the saying, “Keep your money where you sleep” (Disclaimer: not a thing). I feel like in general city planning, most officials don’t live where they work, so this juxtaposition for me was quite surprising. At the same time, Poland isn’t big on palaces which were built for wealth. A practical people, we built places for the royals to live and places that can protect capitals. There are a few palaces in Warsaw, but those were built during more recent times.

Poland was a bevy of inspiration for me. If there’s anything else you want me to write about, shoot me a tweet.