Elliott and I are bona fide internet contacts turned critique partners turned best friends (who are probably the same person). He took some time to answer a few questions on self-inserts, inspiration, and when short form accidentally turns serial.  You can find his work here. It’s also his birthday month.

What comes first: The world or the characters?

Most of the time I have a vague idea about the world they live in, a contemporary setting, urban fantasy or steampunk, or a particular decade if it’s something historical. The finer details of the world always come later.

Where do you draw inspiration?

It’s funny that I write really character-driven work, because a good portion of my inspiration comes from my surroundings. Sweet Revenge was inspired by an exhibit I went to at the Field Museum when I first moved to Chicago. Another story I’m working on was inspired by a trip I took to St. Louis via Megabus. Another was inspired by the Palmer House hotel.

We DM quite a bit about inserting yourself into stories and using writing as therapy. How do you decide who gets to be “you” on a page or when to inject different pieces as a kind of mosaic?

Most of the time, I don’t really decide. A lot of it happens subconsciously. In Afterglow, I made the conscious decision make Zach trans and knew that, as a person who had anxiety over dating as a trans man, we would have a lot in common. But I didn’t set out to make that his story. I just wanted to write about a guy having a sexy hookup.

The fact that he’s trans was incidental, but it also came with a lot of baggage. His sequel is where I made the conscious decision to be like, “Well, I guess this is the story where I work out some issues.”

With my Sweet Revenge series, a lot of the characters have different pieces of me. I didn’t realize it until after the words were already on the page. Once I recognized it, I made a more conscious decision to roll with it while writing.

What’s your favorite scene that you’ve written and why?

There’s a really great exchange between Nathaniel and Phineas in The Majestic, right after Phineas pushes him into the ocean and then jumps in after. In the very first rough draft, I had written that scene from Phineas’ perspective and when I changed it to Nathaniel’s, I knew I was keeping it. I think it shows off their individual personalities as well as their relationship with one another in just a few lines of dialogue. 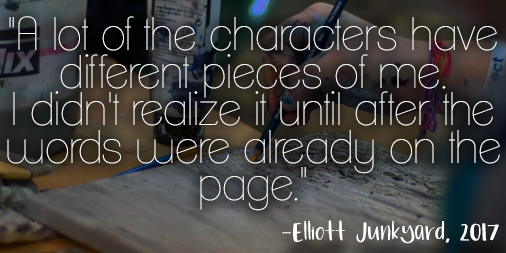 When an idea sparks, how do you differentiate if it’s something for short form or long form?

My brain tends towards the long form. Nine times out of ten, I don’t mean for it to happen—complicated plot and backstory just kind of spring up as I’m writing. I wrote Afterglow because I wanted to write a short sexy one off. Now I have a novella length sequel mostly written and a third book mostly outlined.

Do you have any advice for people deciding to pursue one or the other?

I’ve heard a lot of people who are good at short stories say they wish they could write novels. I heard Elizabeth Gilbert say once how jealous she was of poets because they can say in a 100 words what it takes her an entire novel to convey. Short stories are their own art form so if you’re good at them, be thankful. My advice is always to play to your strengths rather than try to be something you’re not.

What are some challenges that you face between short stories and longer fictions?

When it comes to getting words on the page, what is your process? How do you make the time?

I try to set aside at least a little bit of time every day to devote to writing. It isn’t always getting words on the page though. Sometimes it’s outlining, sometimes it’s revising, sometimes it’s just talking out stumbling blocks with writer friends. But I find if I keep my mind focused on some aspect of writing for a little bit, it’s easier to stay on track. I’ve noticed when I get busy with Real Life and don’t write for a week or more, it’s harder to get back into gear. It’s like my brain tries to trick me into thinking that I’ve forgotten how to do it.

I have a really sweet set up right now in that I’m able to work at my day job part-time and still make ends meet. So that leaves me free to work on my writing and other artistic pursuits full-time.

How many projects are you working on simultaneously or is it one-at-a-time?

I try to stick to two main projects. I have a bunch of WIPs in various states of semi-abandonment but I realized that I work better when I can really focus on a piece. I like to have two projects so I can switch back and forth if I get stuck, but it limits how split my focus gets.

Why self-publish as opposed to pursuing the traditional publishing route?

I come from a zine background, so my motives for publishing have never been monetarily driven. For me, the joy of publishing doesn’t come from making money—it comes from making.

Part of it also has to do with the type of work I’m publishing. Queer Sci-Fi is unfortunately a niche market at the moment. I’d rather give my work away for pennies than write about straight characters just so my stories could get picked up by a traditional publisher.

Are they published in the order of writing?

Pretty much. I get really excited whenever I finish something. I want to polish it up and share it as soon as possible.

One thought on “Author to Author with Elliott Junkyard”