Horizon, the finale to The Bone Universe, comes out today! With intricate world-building, breath-taking settings, and complex characters, I was hooked on Fran Wilde’s writing from the first page of Updraft. Fran took time to talk about her writing process across formats and stories. Her novels and short stories have been nominated for two Nebula awards and a Hugo, with Updraft winning the Andre Norton and Compton Crook awards. I had the delight of meeting her at BookCon 2015 at a group storytelling panel with Tor.

What came first: The world or the characters?

In The Bone Universe‘s case, the world—the city of living bone was part of a short story I wrote in response to a prompt at a writing workshop. The characters revealed themselves in another short story, and then I began wondering what kind of society in this world would ask this of these particular characters.

In Updraft, did you create the technology around the world or built the world first and then worked transport around it?

The towers’ layout meant their citizens had to make bridges and wings to move between them, so world first, again!

Between Updraft and Cloudbound, you switched POV from Kirit to Nat. What inspired this shift?

I knew with Updraft that I could have told the story from either perspective. Kirit’s voice was louder, and it really was her story. Nat’s voice is more reflective, introspective, and a bit stubborn. That was a hard POV to write from, but an important one. Seeing the city from multiple points of view means getting more out of the world, and the characters. How they see themselves and what’s around them is very different from how they see each other. A POV shift broadens perspective.

Also, where Updraft is about voice, and Kirit’s in particular, Cloudbound is about leadership and secrets. That’s Nat’s home turf. Cloudbound had to be Nat.

What’s your favorite scene that you’ve written and why?

Oh gosh, a scene I wrote for a book that’s out on submission right now, with a river in it. I got all wrapped up in moonlight and reflections and birds. 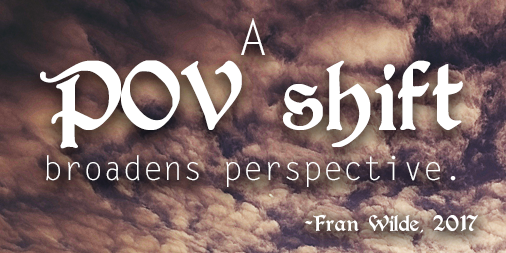 Does your process change for either story structure?

Absolutely. But my process also changes from book to book. For me, process adjusts to suit the shape of the story. But I still always do a little writing very early in the morning before I do anything else. It helps set the tone for the day.

What challenges were unique to The Jewel and Her Lapidary versus The Bone Universe?

Telling a sweeping, epic story in miniature was a challenge, but also very, very fun. I wanted to use the space between the stories—the guidebook’s story and the hidden history especially—to create friction and tell a third story, about what we don’t see or know, even when we think we’re experts.

Working with the gems was and remains a challenge, because each gem is so distinct and there are a number of them. Their impact on each person is also distinct. Keeping track of that, and making sure the lines are differentiated? That’s important and challenging. I’m very much enjoying that and it will continue with the next two novellas that are coming out with Tor.

Was Updraft your first book?

It was not! We call that book The Book That Lives in The Locked Drawer. I lost the key :D.

Seriously, it was really important for me to write a book in order to learn how to write a book—and to realize that I could do that, not just short stories. That book’s value is in what came after, although I still love some of the ideas in it very much.

After working on a major trilogy and a series of novellas, how has your approach to new projects changed?

I’m both more and less organized! I let myself muse more, and draw more, while also trying to work according to a plan because deadlines wait for no person.

Is there anything you know now that you wish you had known when you started?

I wish I’d known to not be afraid to be weird. I love being weird. 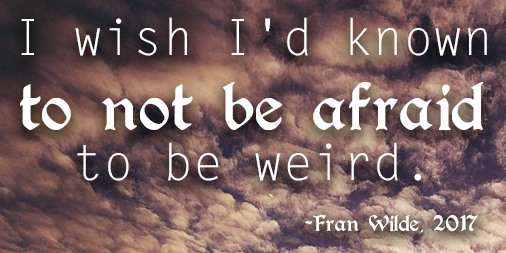 You can find Fran on Twitter, Facebook, and at franwilde.net. Get her books on Amazon, Barnes & Noble, or Indiebound.

One thought on “Author to Author with Fran Wilde”