Friends who write good books are a treasure. The Ragged Blade by Christopher Ruz follows the adventure of Richard and his daughter across a desert while they run away from Richard’s ex, the Magician. This book hit all my Berserk buttons and made for a captivating read. On his release date (June 4th), Christopher took some time to answer questions around writing relationships, writing dual timeliness, and what kind of bad deadline not to set.

Who came first: Richard or Ana? How did you develop such a compelling father-daughter dynamic between them?

Richard and his antagonist lover, the Magician, came first. They sprang out of a dream I had, about a soldier being led into a vast desert by a traitorous wizard. Their relationship changed many times through the revisions and re-re-revisions of The Ragged Blade, but it wasn’t until I stepped back and realised their relationship was that of a mentor/mentee (or even an odd father/son situation) that I realised Richard needed a mentee of his own. A child he could raise as he wished he’d been raised.

Richard and Ana’s relationship took a long time to develop. Some of their dynamic was drawn from my own childhood, of course, but a greater part came from my career as a teacher. This shows in Richard’s efforts and failures to connect with a child who is, essentially, a stranger to him, as well as Ana’s difficulty in forming a bond with a parent who is, to her, completely unknown, untrustworthy, and potentially dangerous.

I had to introduce a lot of doubt into their relationship. A lot of missteps, apologies. A lot of hurt. That’s what their journey is, if you boil it down. Two people trying to understand each other, hurting each other, and then doing their honest best to heal those hurts and grow as a result.

You did a marvelous job conveying the loneliness that comes from wandering a desert, even if you have company. Where did that inspiration come from?

Depending on where you live, Australia can be a lonely place! I only had a few good friends as a child, so I spent a lot of time on my own, wandering through the bushland out back of my home. Note that I didn’t live in the bush, just in a suburb backing on to a huge nature reserve. So it’d just be me and a book for company, walking through forests and scrub and dust, deliberately getting lost and then spending hours navigating my way back home.

It gave me a real appreciation for stillness. For latching on to the tiniest landmarks—a tree with a funny bend, a pile of stones like a cairn—and attaching stories to them that would help me find my way to and from the secret places only a child knows.

When I was ten years old, my family went on a whirlwind tour of the Middle East, including historical sites like Petra and Palmyra. I’ve never forgotten the grandeur of those pillars standing tall against the sky, or that revelatory moment when we turned the final corner in the Siq gorge and the Al Khazneh appeared from the darkness (you’ve seen it too—it was used as the Temple of the Sun in Indiana Jones and the Last Crusade).

Combine those journeys with my childhood lost in the bush, and you have The Ragged Blade.

As much of a mess that relationship was, I really liked the flashbacks to Richard and the Magician’s past. Do you have any tips for writers balancing dual timelines in their works?

Uuuuugh, dual timelines are SO MUCH WORK. They’re even more work when you want to explore the “past story” as a nested narrative. That was something I was set on from the beginning—that Richard would be telling his story to Ana, not just cutting back and forth between stories. Which meant I had to find points in the main story where the characters could breathe, and use that as a transition into the past, while also making sure whatever we saw in the past reflected thematically upon the present…

My first piece of advice is don’t do it. But if you really must…

But really, just don’t do it.

What was your favorite scene or moment to write?

You get the idea.

The Road to Publishing

Is The Ragged Blade your first novel?

I’d say it took writing those first four books to really understand the structure of a good novel, and it took another eight books after The Ragged Blade before I knew how to go back and polish a well-structured novel into something compelling and personally engaging.

Is there anything you know now that you wish you could tell past!Christopher?

Don’t set deadlines on your dreams.

When I was around 20-21, and I knew I wanted to be an author, I made a promise to myself. I’d either make it big by 30, or quit writing forever.

As it turned out, I’d only made one pro sale by 30 and didn’t sign the contract for The Ragged Blade until I was 31. No matter. Everyone follows a different trajectory. You can’t compare your writing journey to other people’s, and you can’t assign an arbitrary deadline to success. I wish I could tell past Ruz to focus on craft and discipline instead of chasing dates.

The day doesn’t matter, tiny little past Ruz. All that matters is telling a good story.

What other projects are on the horizon after The Ragged Blade?

Century of Sand 2: The Riven Lord (a working title for now) is already with my editors at Parvus, but that still needs a year of revisions and fine tuning. In the meantime, I’m polishing a cyberpunky space opera about AI theft and big stompy robots, revising a fantasy novella about a fisherwoman becoming god, wrapping up the fifth and final book in my ongoing self-pub small-town horror series Rust, and outlining a Lovecraftian adventure set during the French Revolution that’s I describe as Bloodborne vs the Bourgeoisie.

I also have a YA crime thriller that I poke at every few months and say, hrrrm, and then put back in the box.

What are some books you’d recommend to keep the book hangover at bay?

I’m in love with Jay Kristoff’s Nevernight trilogy, N.K. Jemisin’s Broken Earth trilogy, The Vagrant by Peter Newman, S.A. Hunt’s Outlaw King series, and (thanks to Tor.com previews) Gideon the Ninth by Tamsyn Muir. They have, in order: wonderful stabby girls, hope peeking out through curtains of desolation and loneliness, a nurturing but conflicted protag with a big sword, violent adventures through psychedelic desertscapes, and prose so clean and vivid that it sticks in your head for days. Five series containing everything I need, and that make up so much of The Ragged Blade’s DNA.

Or, if you’ve tried The Ragged Blade and enjoy what I do, you could check out my horror series Rust? It’s got wobbly eldritch things and mutations and an angry New Yorker trapped in a haunted town, kicking the shit out of everything she sees. I think it’s pretty neat! 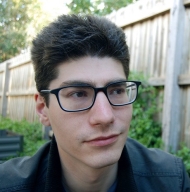 Christopher “Ruz” Hayes-Kossmann was born in Hong Kong, raised in Vienna, and is now settled in Melbourne, Australia. Although he graduated in 2010 with a Bachelor of Industrial Design, his first love has always been writing. He’s been published by Weaponizer, Labyrinth Inhabitant’s Magazine and Birdville Magazine, and has won both the first Ergofiction Search Term Challenge and the first Birdville Impromptu Award. You can get The Ragged Blade from Amazon, Indiebound, Barnes & Noble, or wherever books are sold. You can follow him over at Twitter and his website.