Happy book day to The Kill Club! Wendy Heard’s sophomore book taking place in Los Angeles about a young woman who turns towards a secret murder group to get her younger brother out of the hands of their zealous foster mother. It’s intricate, it’s stressful, and it is so Los Angeles. Wendy answers some questions below about the research that went into this twisty thriller and the inspiration behind the story.

Where did you get the idea for a clandestine network of, essentially, assassins?

It started with this video, and with a lifetime of knowing people who fell victim to crimes the system didn’t prosecute. I wanted to explore what other routes to justice people might take if the main one was blocked to them.

What were some challenges in making the club believable, especially given the contemporary setting with people being so online?

I was very careful to check every single logistical aspect of this murder club. I basically had to imagine how I, with my years of research into forensics and evidence and crime scenes etc., would do this to minimize risk to all involved. One thing I wanted to dig into was the idea that adding a bunch of irrelevant evidence to crime scenes could confuse a police investigation. I also had to figure out exactly which type of poison would do what was needed, how much would be needed, how you’d train laypeople to deliver poison injections…I did a LOT of work to make it all believable. In the process, I worry I wrote what is essentially an instruction manual, God help me, but I hope this book also illustrates why a murder club is a very, very bad idea for all involved.

Were any of the murders taking place throughout the narrative inspired by any stories in particular?

Was there anything you gleaned from your research that got left on the editing room floor or tales you wish you included?

I was only able to use about half, or maybe a third, of the stories I got from my interviews. It was with sadness that I cut some of the true stories, but I had to make sure the plot didn’t feel repetitive.

The Road to Publishing

With Hunting Annabelle as your debut (and technically historical fiction), how was writing more contemporary different?

Hunting Annabelle was SO research-heavy, I wanted to do something where the world-building would come easier. Plus, all the blackbird kill club stuff required a ton of research (I had to interview social services, the FBI, the police, etc, not to mention all those victim accounts), and I’d been wanting to write a book set here in my hometown. So it worked out very well to just write what I know and not have to do any world-building research. Every place, street, neighborhood, store…it’s all places that mean something to me, or are close to me personally.

Was this book originally one of your trunked novels or an entirely new project altogether?

It was new! But I’d been playing with the idea, figuring out who the main character would be, working my way through allll those POVs, for awhile. Originally, it was going to follow a woman who couldn’t get justice and started a murder club. Then as I wrote it, I decided it was more interesting to see the club up and running and see someone get drafted in. And then I landed on Jazz as narrator, and it all worked out. I was afraid to cast Jazz as the MC; I didn’t know if people would relate to her. But I needed to write her, and I decided to trust that she would pull it off.

With your YA debut She’s Too Pretty to Burn coming all the way in winter 2021, what are some books you’d recommend to keep the book hangover at bay? 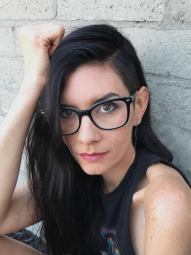 Wendy Heard was born in San Francisco but has lived most of her life in Los Angeles, which is on fire more than she would honestly prefer. She holds a Bachelor’s degree in Studio Art, emphasizing painting, and a Master’s degree in Education. When not writing, she can be found hiking the Griffith Park trails, taking the Metro and then questioning this decision, and haunting local bookstores.
Wendy is a member of Sisters in Crime, International Thriller Writers, and Mystery Writers of America, is a contributor at Crimereads.com, and co-hosts the Unlikeable Female Characters podcast.

Get The Kill Club from a local indie, Barnes & Noble, Amazon, and wherever else books are sold.