I am beyond excited to celebrate and talk to Aleksandra Ross, debut author of Don’t Call the Wolf. Inspired by the “Glass Mountain,” this young adult fantasy draws on Polish folklore and features dragons, shape-shifting lynx queens, and a soldier wanting to bring his brothers home. In this interview, Ross touches on her favorite scenes, the myths that didn’t make it onto the page, and books she’s looking forward to.

Thank you so much for having me on your blog- I am so excited to talk about Don’t Call the Wolf!

How did you decide which folk tales to weave together into this story?

It was hard! My goal was to showcase Polish folklore and culture, but to do it within the framework of a traditional fairy-tale quest. I wanted the story to feel familiar in its themes, but culturally distinct at the same time. To do that, I tried to choose folk tales that would balance Polish elements with ones that felt more familiar—like having distinctly Polish creatures mixed with familiar ones, like dragons. I also invented some of my own mythologies to complement the traditional tales—for example, Lukasz comes from a race of Dragon-Slayers, known as Wolf-Lords. Instead of being based on any one legend, the Wolf-Lords were my imagined take on a mountain-dwelling, dragon-slaying culture.

Were there any tales that didn’t quite make it onto the page?

Oh yes. Believe it or not, there were way more monsters in early versions of the book. There were really fun creatures like zmora, banniks, and kikimoras —almost all of them carried whole scenes in early drafts. In the final version, these wonderful creatures are still occasionally referenced, but left mysterious on purpose. I really wanted the world of the story to feel lived in but still a bit unknown, like we were experiencing it for the first time together—almost as tourists instead of readers.

Because you bring in so many different stories and creatures, did this book come sequentially or thematically?

It was a combination. On the one hand, I really wanted to be faithful to the fairy-tale structure, so those elements developed very sequentially. On the other hand, the spooky, haunted atmosphere evolved thematically with every draft. My main inspiration came from memories of reading Polish books with my Grandmother—especially the artwork. They were often stark and a bit haunted and I tried to capture that atmosphere within Don’t Call the Wolf.  Another common style of art was wycinanki (a traditional paper-cutting technique). Wycinanki images are very intricate and tell stories within stories—I tried to capture that same intricacy with the many interwoven storylines in Don’t Call the Wolf.

Whose storyline came to you first?

Ren and Lukasz, definitely! As the half-human queen of the forest, Ren is the book’s main character. I fell in love with her almost as soon I started writing. She has such a soft heart despite being so prickly and dangerous, and I love watching her battle monsters, demons, and—occasionally—dragon-slayers.

Writing Lukasz’s chapters also came so easily. As the book’s other main character, Lukasz is a soldier in an army regiment specializing in dragon slaying. I’ve always had a fascination with dragons and military life, so developing his world—which hinges on both—was so much fun.

What was your favorite scene to write?

I have two favourites, both of which are extremely spoilery! There is one scene which takes place in an abandoned village. It’s a sweeping Beauty and the Beast moment, with loss, memory, and beautiful music. It just leapt off the page for me.

My second favourite scene was a violent one. It was a challenge to write, and I felt so bad for the character involved—so I’m just really proud I finished it. Unfortunately, I can’t share many more details without giving it away…even though I want to! I’ll just say: when you get to that scene, you’ll know.

PUBLISHING AND THE ROAD TO COME

Is Don’t Call the Wolf your first novel?

Yes! I always wrote a lot, even long before creating Don’t Call the Wolf—but I’d never truly finished a book. I had a lot of large pieces of stories, spanning a variety of genres, but this was my first complete manuscript. I’m so grateful the stars aligned and this is my first book. This story is very personal for me, and I’m so lucky to be able to share it.

What do we read next to soothe the book hangover?
My favourite question! I recently read the Megan Whalen Turner’s The Queen’s Thief series, and I absolutely adored it. It felt classic but was at the same time completely unexpected. I can’t wait for the next one! My other current favourite series is The Diviners by Libba Bray. I haven’t finished it yet because I’m saving the last installment (The King of Crows). It really is the most epic, magical, sweeping series.

What are some books that you’re looking forward to?

So many! Rae Carson’s Empire of Dreams is on my list. I also haven’t read Leigh Bardugo’s Grishaverse series yet—I’ve been meaning to for so long, but I just haven’t had the time. But now the casting for the new Netflix series has me waiting for the perfect moment to dive into Shadow & Bone. As you know, I love a tall dark hero—or villain—so I think that one’s next for me! 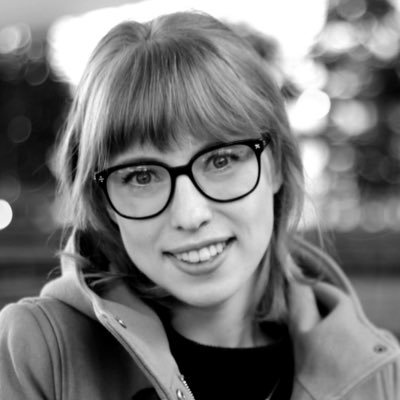 Aleksandra Ross’s earliest memories include sitting on the couch and listening to her grandmother read the Polish folktales of her childhood. She grew up in Vancouver, BC, and went to medical school at the University of Alberta. Don’t Call the Wolf is her first novel, which you can buy today here. Follow her on Twitter and Instagram at @rosswriting.

2 thoughts on “Author to Author with Aleksandra Ross (#DCTW)”